ADF is built on a Model View Controller design pattern that separates the data from how the end users interact with the data. 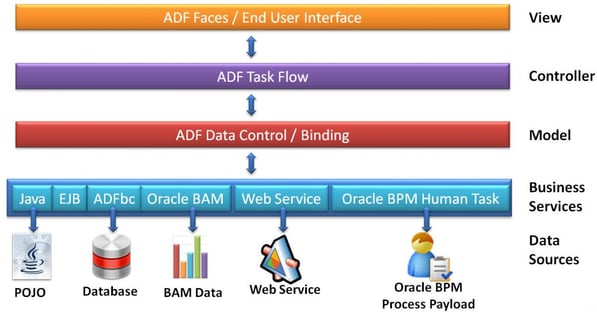 The View layer represents the forms that you create in JDeveloper that is also known as ADF Faces. There is a misconception that ADF is just the View or user interface layer shown to end users as a part of a web based application. While the View is important, it is just one part of the architecture.

The Controller layer is handled by task flows modeled in ADF's task flow diagram shown below. During a single interaction with an end user, a single page might be presented and the end user simply clicks the button that submits the one form. The Controller layer’s important because there are also frequently multi-page interactions with an end user before they finish what they are doing.

The Controller layer models this UI page interaction using ADF's visual drag and drop Task Flow Diagram. In the above example, the interaction between the UI forms, the routing rules and the methods invoked are modeled. This example has a method named "SetCurrentRowWithKeyValue" automatically invoked that retrieves database information based on the ID key passed into the task flow. The end user is then shown the form associated with the "taskDetails1" view activity on the diagram. If the end user selects the "Address" button on the form, the "router1" router activity automatically determines if the end user should see the US based address user interface form (the "US_Address" view activity) or the non-US based address user interface form (the "Address_jspx" view activity). 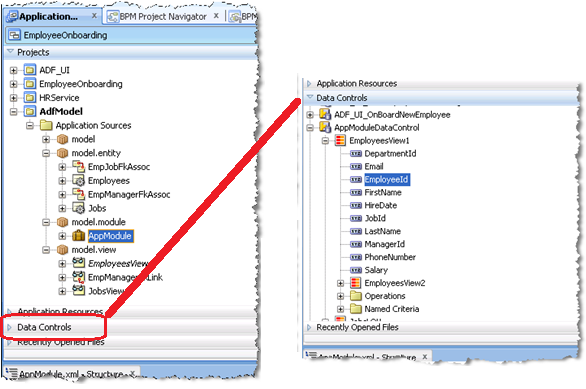 To tie it all together from an Oracle BPM and ADF design perspective: