A new version of Oracle BPM Suite 11.1.1.7 with Adaptive Case Management (ACM) is now available, so what will that mean for requirements gathering? BPM project requirements can be documented using Business Process Model and Notation (BPMN 2.0). For ACM, there is a new notation in the works. It is called Case Management Model and Notation (CMMN). For now, this notation isn’t included as a modeling tool in the new version of Oracle BPM Suite 11.1.1.7 with ACM, but it is possible that a modeling tool could be included in a future release.

CMMN is a standard intended to capture the common elements that Case Management Products use, the same way that BPMN is a standard for BPM products (such as Oracle BPM). CMMN is created by the Object Management Group (OMG) and is still in the beta version. In April 2014, OMG released the second beta version the CMMN 1.0, and the most recent version is available here. 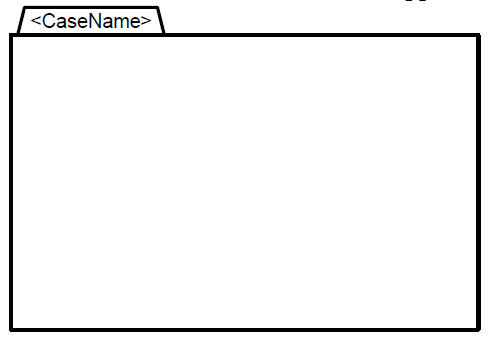 Shape: Document - Rectangle with a turned-down corner on the upper right side.

This icon represents any documents that are used within the case, or created as part of a case. The title of the document is typically written directly underneath the document icon.

Tasks (aka. Activities) represent the work that is being done in the case. In Oracle ACM, tasks can be either a Human Task or a BPM Process. All of the work done for a case should be captured in tasks within the case model.

Stage is a container to visually organize tasks and other CMMN Symbols. The stage doesn't do work or represent milestones for the case, it is simply a place holder to visually help model the case. Stages are often used to help organize tasks the must be completed in order for a milestone to be reached. Stages can be expanded or collapsed and have a + or - on the bottom center.

Event listeners are triggers in the case that watch for specific things to happen. There are several different types of Event Listeners such as timer and user events.

Tell us what you think:

Since CMMN is such a new method of modeling, it will be interesting to see how it develops along with the Oracle ACM tool set.

Do you think CMMN will be an effective way to model ACM projects?

Would you be interested in learning more about CMMN?

Leave a comment below and tell us what you think.

Check the blog at www.avioconsulting.com for future posts and take a look at some of these articles: